Birdathon is a fundraiser where teams collect "per bird species" pledges from their friends, family or anyone who wants to sponsor them. The teams went out birding on either April 26, 27, or 28 and trie to find as many bird species as possible.

Birdathon helps fund many of our exciting programs, including: Grants and scholarships that support important research and send young birders to camps and conferences; Conservation initiatives, like our Peck cleanups and our new native garden project at Washington Elementary.

Pick a team, and either make a per species donation or a lump sum. You can make your donation online:

Or mail your check to (and please indicate the team you are supporting):

Here are the current results:

For 2019, the Pasadena Audubon Birdathon "Green Team" was Naresh Satyan and Darren Dowell, with Christopher Stevenson joining for the Friday afternoon/evening San Gabriel Valley segment. We aimed to find as many species as possible in 24 hours, traveling mostly by public transportation, bike, and foot. We started counting at 8:45 AM Friday in Manhattan Beach and ended at 8:45 AM Saturday around 4000 ft. elevation in the San Gabriels above Altadena. We traveled the longest distances by train (Gold, Green, and Expo Lines) and bus (Silver Line and Foothill Transit). But we also logged 40+ miles by bike and almost 10 miles by foot. To begin the mountain segment early Saturday, we did use cars to travel the 3 miles from Pasadena to Cobb Estate in the dark, before the buses have service in that area, but then we paid penance for use of cars by climbing the firebreak up to Mt. Lowe Road -- 1000 foot elevation gain in 0.6 miles of trail.

This route, some timely bird spotting, and more than a little luck produced a total of 156 species. (We are using eBird counting rules: yes on Egyptian Goose, Indian Peafowl, and Northern Cardinal, but no on Muscovy Duck.)

We had two overall highlights. First was the serene bike ride along the ocean, from Manhattan Beach to Marina Del Rey, on Friday morning. This was the furthest the Green Team has yet ventured from Pasadena, and it brought many first-time species for the team. Second was the "bird migration superhighway" in evidence from our vantage point in the mountains Saturday morning. We climbed out of the basin fog at about 3000 feet just before sunrise, and for the next two hours we saw hundreds of birds streaming by, southeast to northwest -- hundreds of warblers; dozens of Western Kingbirds, Cedar Waxwings, and Lazuli Buntings; joined by Western Tanagers, Warbling Vireos, and Orioles.

We didn't find any rare birds, but we were excited to encounter: 8 Snowy Plovers in their sharp spring plumage near the Dockweiler Beach enclosure, a Wandering Tattler on the Marina Del Rey jetty, Bonaparte's Gulls and Blue-Winged Teal in Ballona Creek, a singing Northern Cardinal in the Whittier Narrows area, a Green Heron flying by at Legg Lake as if conjured by our mention of the species, Forster's Terns at Legg Lake and Santa Fe Dam, a brief appearance of a Lesser Nighthawk by the Encanto Park bridge, a number of last-hour montane and migrant species, and Hermit Warblers at both our first (Sand Dune Park) and last (Mt. Lowe Road) locations.

We much appreciate the generous donations to Pasadena Audubon by our sponsors -- and it's still not too late! -- and we're already thinking about next year. 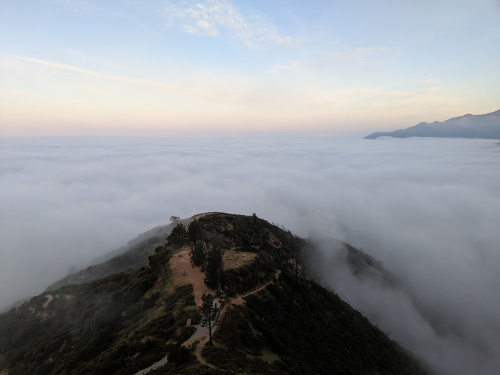 This year’s team was ten strong and ranged in age from under 30 to over 70!!

We started at Peck Road, a favorite spot, where we had hit an amazing 72 species last year. This year has been strange with lots of winter rain and many bits of habitat around the lakes were washed out. We only got to 52 species in over 3 hours of birding, a little disappointing. The highlights were Black-chinned hummingbirds, several very colorful Bullock’s Orioles and Least Bell’s Vireos which are endangered. These were loud and heard by all, but only seen by a few.

We then headed to Legg Lake where we saw 43 species, 18 of which were new. The highlight there was a Great Horned Owl family, both parents and a very fluffy owlet were in plain view, observing us from the upper branches of a pine. There were also nesting Cormorants and Great Blue Herons.

Finally we headed to Whittier Narrows Nature Center, only a five minutes away, but offering very different habitat. It was almost 2 pm, and the team was down to four, but we trudged on, and were welcomed by young House Wrens who were very active in the trees in front of the Nature Center. We added a 11 more new species in about 40 minutes, ending up at 81!

As is now traditional, we finished at Mijares, with half the team around 2 pitchers of margaritas. Good times! Donations are still rolling in… 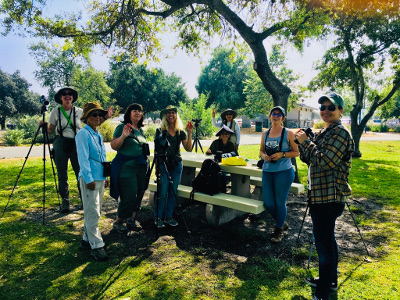 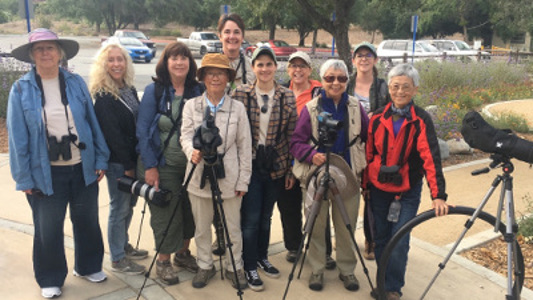 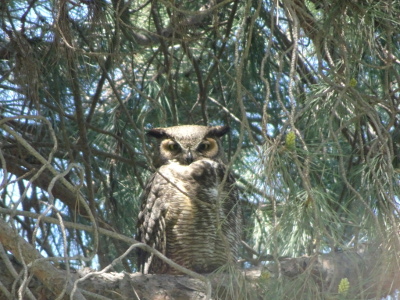 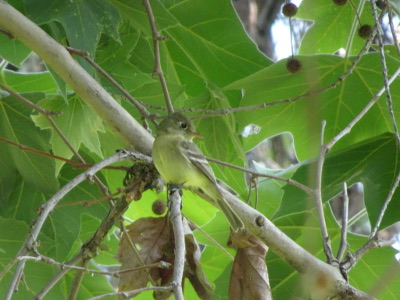 Early Sunday, April 28 th our team was up, planning an ambitious 35-mile bike ride to achieve our goal of seeing 75 species of birds in a day. Little did we know what an amazing day that it was going to become!

Mom and I started off the morning by taking our local bike path to get to Franklin Park and my middle school. On the way we saw Northern Mockingbirds and a California Scrub-jay. At my school, we found all of our target birds – Brewer’s Blackbirds, Red-tailed Hawk, and Cassin’s Kingbird, plus Hooded Orioles nesting in the cemetery across the street. At Franklin Park, we found ourselves in a migration wave finding lots of Hermit Warblers and a Black-throated Gray Warbler, but unfortunately not finding the nesting Cooper’s Hawks, even though we knew they were around. As it turned out, all of our stops were full of migrants, which gave us several bonus species for the day. We arrived at Columbia Park a little bit behind schedule, but the birding picked up here, where we saw Western Bluebirds, Yellow-rumped Warblers, Townsend’s Warblers, Western Tanagers, and a rare Palm Warbler!

Madrona Marsh was the highlight of the day, where we saw marsh birds like Canada Geese with goslings, Killdeer, Gadwall, a Sora, and Red-winged Blackbirds everywhere, and migrants like Lazuli Buntings and Black-headed Brosbeaks, Yellow Warblers, Wilson’s Warblers, and Common Yellowthroats.

After Madrona, we had found an almost complete sweep of all the possible migrants, and found ourselves a problem: after you have seen all of the usual birds, where else is there to go? I had a lot of stops planned before we got to the coast in order to try and see as many migrants as possible, but I was unsure whether or not we should continue with this plan. We decided that it was worth it and in short order covered Wilderness Park (flyover Double-crested Cormorant), Henrietta Basin (Black-crowned Night-heron), and Entradero Park (Pacific-slope Flycatcher). We had a picnic at Entradero, where we met up with our other half. After Mom and Dad traded off and my sister Sama tagged along, we headed to the coast.

We biked along the Strand to get to Sand Dune Park, stopping briefly at the Manhattan Beach Pier and seeing species such as California Gull and Elegant Tern. At Sand Dune Park, migration was in full swing, where we saw tons of migrants in beautiful detail, but the only new birds there were Western Kingbirds and a singing Dark-eyed Junco. We left Sama to play on the sand dune with Mom, while Dad and I biked along the Strand to get to Playa Del Ray and the Ballona Wetlands. While we planned to bike straight to the Dockweiler snowy plover enclosure, that plan was abandoned after a feeding frenzy offshore, several shorebirds (Whimbrel, Willet, Sanderling), a flock of Brown Pelicans, and finding the Dockweiler Surf Scoter flock. By the time we actually got to the snowy plover enclosure, there were no plovers to be found. That didn’t stop us though and we headed on, undeterred.

Arriving at Del Rey Jetties and Ballona Creek, we found the jetties to have no birds on them, but Caspian Terns were calling loudly overhead and the breakwater was full of gulls, pelicans, and cormorants. At Del Rey Lagoon, we found a calling Belted Kingfisher, broadcasting its loud rattle across the pond. We headed to Ballona Freshwater Marsh and found Pied-billed Grebes with babies, Black-necked Stilts, and lots of Ruddy Ducks.

We biked the long bike ride back to Redondo Beach without seeing any new birds, but racing the sun for the last little bits of light to get home.

It was an awesome day, with 82 bird species seen and $245 raised! I always look forward to Birdathon for the chance to see as many species as possible, but also because it gets me out birding so that I have the opportunity to observe many species that I wouldn’t see otherwise. I can’t wait for Birdathon next year 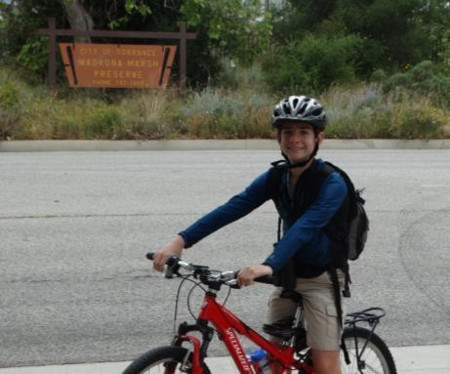 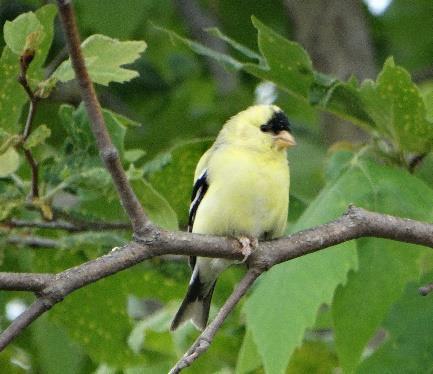 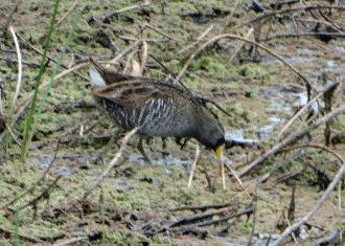 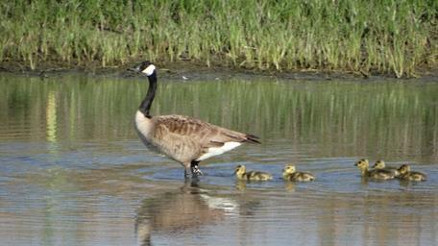 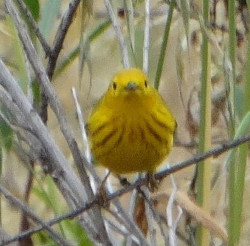 Team Adriana (Adriana and her mom) spent last Saturday here in the SGV visiting 5 locations and finding 35 bird species — 11 more than last year! Locations included: Home (1), Almansor Park, Alhambra (9); the Huntington Library & Gardens, San Marino (7); the Arboretum parking lot, Arcadia (1); and Whittier Narrows, South El Monte (17). We could have found more, but got distracted for a few hours by a plant sale at the Huntington, so it slowed us down! 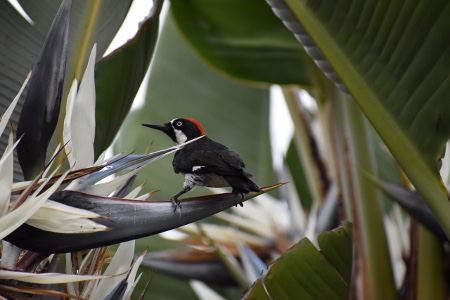 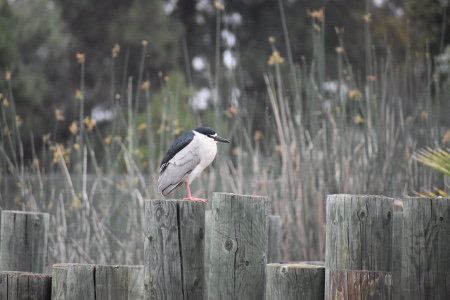 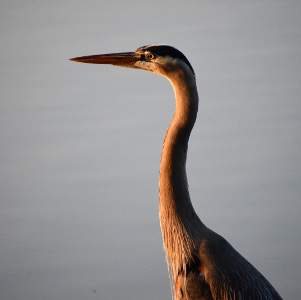 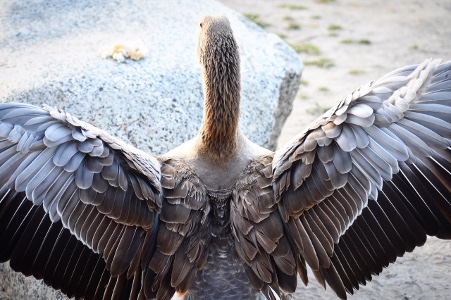 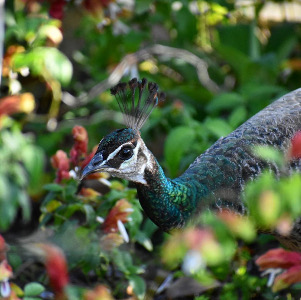 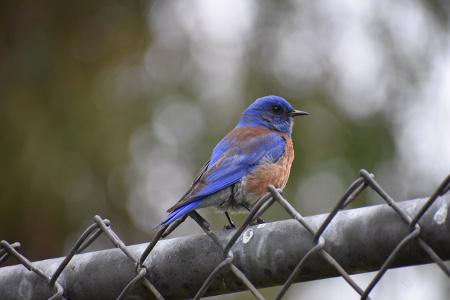 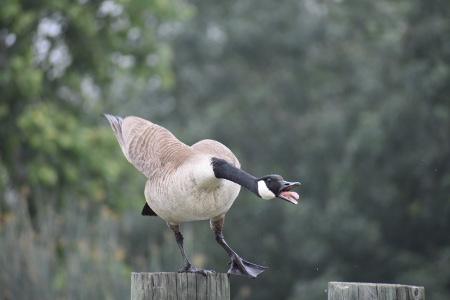