The Pasadena Audubon Society is now an official supporter of "Bird Names for Birds". The goal of the initiative is to replace all (approximately 150) eponymous English common bird names with descriptive names that have been agreed upon by a diverse group of stakeholders, including Black, Indigenous, and People of Color. We believe this is an important step toward making birding more inclusive and welcoming for all. 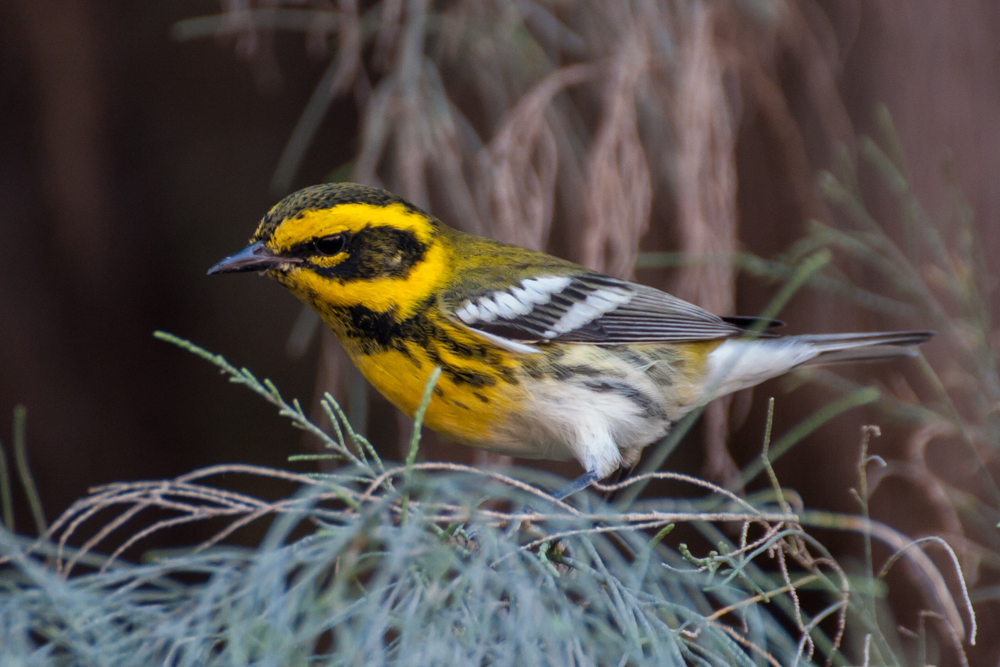 A Townsend's Warbler (Setophaga townsendi), one of the more than 100 North American birds currently named after people. Photo by Luke Tiller.

In North America about 150 bird species -- from Abert's Towhee to Zenaida Dove -- are named after people. These so-called eponymous species include some of the most common and best-known birds in Southern California, such as Anna's and Allen's Hummingbirds, Bullock's Oriole, Cooper's Hawk, Say's Phoebe, and Heermann's Gull. Virtually all of these species were named in the 18th and 19th centuries, but in the past few years a growing number of people in the birding world have become aware that a number of these bird names commemorate people whose behavior and/or beliefs are now considered repugnant. There's also an argument that the whole concept of naming a bird after the naturalist who "discovered" it is nonsensical, since the birds were already known for millennia by native peoples throughout the Americas. The Bird Name for Birds movement advocates changing the names of these birds to names that are in some way descriptive of the species. Many local species, such as the Red-tailed Hawk, Black-headed Grosbeak, Great Horned Owl, California Scrub-Jay, and Ringed-billed Gull are already named that way.

How do you change a bird's name anyway?

In North America, the common English language names of birds are determined by a committee of the American Ornithological Society (AOS)*. Each year the committee considers proposals regarding the classification and naming of birds. Last autumn the committee voted to change the name of a grassland and prairie bird called "McCown's Longspur" to "Thick-billed Longspur". The bird was originally named for John Porter McCown, who collected a specimen of the bird in 1851, and then later went on to serve as an officer for the Confederate Army in the American Civil War. Advocates for the change argued that it was wrong to have a bird named after someone who fought to preserve slavery.

The AOS also determines the scientific name of bird species. The committee did not change the bird's scientific name, Rhynchophanes mccownii, since doing so would complicate matters for future researchers.

*North American name and classification changes made by the AOS are then typically accepted by the International Ornithologists' Union, the world governing body for bird names.

Where can I learn more?